Rhesus are prone to being more aggressive, and people have made me hyperaware of them, and – I think – hyperafraid of them just be speaking about the issues that the rhesus have, and the way they will interact with humans, and specifically females. I’ve been told “carry a catapult (slingshot)”, “carry rocks”, “they’re smart enough to know how many rocks you have, and will attack you once you’ve thrown your handful”, “they’ll attack women”, “they prefer to attack women over men”, “they attack women walking alone”, etc. I don’t doubt that they have, and will — but I’m also concerned that people have hyped up the rhesus aggression to a point where I’m insensibly worried.

The langurs, on the other hand… 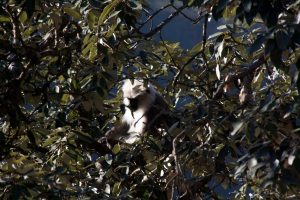 they’re more afraid of humans than we are of them (and I’m slowly getting out of the ‘oh! wild monkey! oh!’ stage), and the only complaint about them is they’re larger than the rhesus, so we can definitely tell them thumping on our tin roof. They are gorgeous to look at, and the troop that comes and has brunch in our trees has a pair of juveniles that are balls of little white fluff – my attempts to take pictures has generally been foiled by sun and angle. They eat acorns (or at least, these things that look like acorns) and you can tell they’re in an area, even if you can’t see them, by the pop!pop!pop! noise of them chewing on the acorns.

Langur on the roof of Edge Hill

There are also two बंदर employees here at Woodstock – langurs on leashes! They are walked round the campus by watchmen, who are on call to come scare the rhesus away if they are problematic. This could be the rhesus troop at your house, and you don’t feel safe walking out to get to class (as happened to one staffer I spoke with); she called the watchmen, and they and the langurs came to the rescue.

They also are available to assist if the rhesus are a problem for the kids; I understand one day that the rhesus were running up and down the canopy of the path that leads up to the Senior School, and the kids didn’t want to go in; they were afraid. So – the watchmen were called, and the langurs came to ensure they could get to class… 🙂

One of the employee langurs at Woodstock School