Only in India? … Not really.

At first, I wanted to say “only in India”… and then I thought about it, and realised that no – it’s not “only in India”, it could have happened anywhere. The circumstances are different, the way it will be handled is different, but this is also in Canada and America, too. We’re having work done at South Hill (yay!), but to do that work… it appears they’ve had to demolish part of the property to do so. They brought a JCB (earthmover) in, to shift the dirt they’re using to fill up the gaping empty space in front of the houses. However to do that, they had to knock down the stairs since the JCB can’t negotiate them with treads. Adam and I were fully prepared for the noise they warned us about – dumping the dirt and rocks that would be used as fill down the side of the hill.

We weren’t prepared for this, coming home: 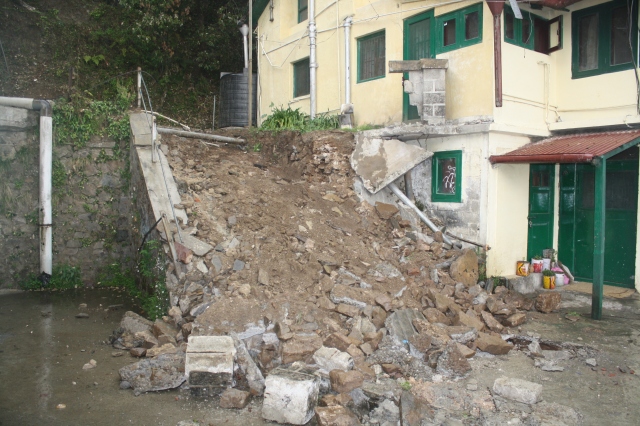 Where this pile of dirt and concrete is… that’s where our staircase was. It was perhaps not the most gorgeous of staircases, but it was one – and walking home in the rain, to see this (the photo being taken after a successful navigation down), was quite upsetting since it’s the start of our Quarter Break today. I’ve sent emails, we’ve made phone calls, and the backup for the out-of-town department head is a friend of mine, so I am hoping that he’ll at least be able to file it away and pass it to the appropriate individuals to handle. Any construction company may “forget” to mention something when they’re doing work, or have to just do something spur of the moment and not warn the homeowners, in order to achieve their contracted task. Only in India: no.

The second frustration has been Adam’s HP computer; it needed a thorough cleaning so we brought it last month (the 14th) to the HP service centre in Dehradun. It was not until this morning that they finally said they can’t clean it (out of warranty) and suggest he get a cooling pad instead. The issue is he already has a cooling pad, and needed the insides of the computer cleaned – warranty or not. We would have gotten the same tech run-around in the US or Canada; the only difference would likely have been the fluency of the English. Only in India: no.

It’s been frustrating, but this week has had its share of positives too – Adam and I have been invited to my Kathak teacher’s for lunch on Sunday when we go to Dehradun, I’ve been asked to teach a professional development class for a department at Woodstock (eek!), and we are getting our train tickets booked for this summer break (plane tickets already done), so everything is coming in its time and stride. We’re also very lucky to have rain right now, because dry jungle, dry farms and dry mountains are poorly producing ones, as well as ones that are at risk of having forest fires next month. The temps are already 27, 28 (C) and higher in April, and will only creep upward in May.

← NYT Article – “Saris and Chuppahs”
Cricket, as defined by Samosapedia →