Living overseas is not easy. Friends and family are far away and you see them when schedules permit – sometimes there are losses, severe illnesses, births and weddings, and you miss them. We have experienced all of those while we have been in India, and it makes life as an expatriate a challenge. We have also said goodbye (more, though, a “see you later!”) to people who became close friends after a short period of time – the Garcias in 2011, the Brodies in 2012, the Fidlers in 2014, just to name a few. It was in the second half of 2012 that I looked at Adam and said “I don’t know if I can deal with this anymore. I’m tired of emotionally investing myself in people who turn around and leave, and I don’t know if I can keep doing it.” 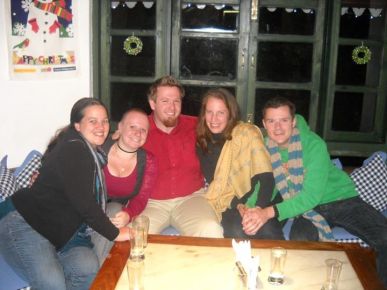 Three of the friends we miss: Holly Berg, Meg Brodie, and Matt Brodie.

That is the long-term expat’s life, however. The choices are stark, but simple: invest yourself in making new friends and connecting as tightly as you can with them and then dealing with the unhappiness of departure, or keep yourself locked away and reserved, never making connections, and likely feeling unhappy for the duration of your overseas time by not having a close group of friends. Better to have loved and lost, or to never have loved at all? At the time… sometimes one really wishes they had never loved at all, frankly.

Developing emotional resilience is a trait Adam and I have both had to work on. Neither of us are particularly self-confident, and I’m one of those introverts-who-pretends-to-be-an-extrovert (I apparently fake it well); coming to terms with not being present for a grandparent’s death, the birth of a friend’s child, or the marriage of a childhood friend is rough. We’ve even had a set of friends move to Finland while we’ve been gone! It begs a question and hours of mental examinations, every time something happens: “Am I really that good of a friend, then? Is the rest of my family going to hate me or think I’m disrespectful or callous, because I didn’t make it back for this major event? And how will I keep going, after making friends who leave, year after year?” Your self-confidence plummets as you ask harder and harder questions, and have to confront the different facets that are not often explored when you’re close to home. 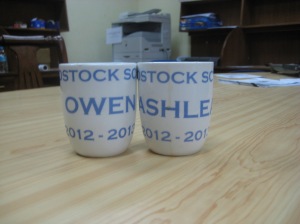 And this is the closest we get to the Fidlers, these days… They’re off in Beijing, now, awaiting the birth of LO!

All of that said – we would not change the decision to move here, or these experiences. Becoming more emotionally resilient, able to reach out and make new friends, keep in touch with old ones, learn how to celebrate and grieve from afar: these are a series of skills that are hard to learn, but valuable. We have figured out our ways to “bounce back” from the hits and hurts – things like Skype and Facebook are a boon in keeping in touch with those we’ve lost from the mountainside, and those who are thousands of miles away and have never been out here, either.  I’ve been working on this post for a while, and both times I worked on this on the 28th we had conversations with friends we missed. Hi, Fidlers! Hi, Procenkos!

I mentioned to the Fidlers about this challenge while we chatted, and Owen commented quite poignantly: his nephew’s fifth birthday happened recently, and he looked at his family and said “When is the last time we had a birthday like this, with everyone together?”

We’ve made a decision – and it’s a rough one – but we think there are very important lessons to be learned from living abroad, and critical experiences to be had that we couldn’t have if we were to live back in either of our home countries. One of those lessons is learning how to come to terms with *not* being there for every event, and the fact that our friends and family (usually!) still love us just the same.

At least, that’s what they tell us! 😉